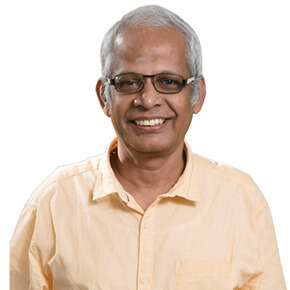 Prof. G. Sivakumar has been on the faculty of the Department of Computer Science and Engineering, IIT Bombay, since 1991. His core research interests are in the applications of Logic in diverse areas of Computer Science such as Artificial Intelligence, Software Engineering and Network Security. He is the Head of the Centre for Formal Design and Verification of Software (CFDVS) which undertakes projects related to design and verification of safety critical real-time systems. Such systems include computer based control systems used in nuclear reactors, space, avionics, process-control and robotics.Prof. Sivakumar has published over 25 papers in reputed journals and conferences. He has supervised 5 Ph.D. theses and over 80 Master’s theses. He has served as a member of IIT Bombay’s Board of Governor’s (2006-2007), and on the Governing Council of IDRBT since 2005. He was a Founder Member of the Open Source Software Resource Centre (with IBM and CDAC) and has chaired the Committee on Interoperability Framework for Open Standards in E-governance. He serves on several Technology Advisory Committees including those of RBI, NPCI, CCIL, NSDL and SEBI. Prof. Sivakumar’s other passions include chess, carnatic music and Sanskrit.